The Road to Fringe: Invoking Justice

Fringe starts this week! Today is our first day of Fringe rehearsals at Geva, so we’re excited to finally start seeing some of our guest artists in the building and looking forward to welcoming audiences, too, in just a few days. In the meantime, director and choreographer Curtis Stedge explains his interest in dance-theater and shares some of the ideas that inspired Invoking Justice.

To be honest, when I was tasked with the responsibility to create this choreographic work, in culmination of my MFA thesis (2016), I had no preconceived notions about what the final product would look like, nor what it would thematically speak to. The only thing that was crystal clear to me was that the work would lie comfortably within the genre called dance-theater.

Though I have, since an early age, been drawn inextricably towards movement creation and exploration, my first and most lengthy foray into the performing arts rests with theater. From my initial, and traumatic, experience in preschool, crying at the edge of the room within which my fellow students performed a clown parade, to my successful run as a high school actor, landing many of the lead roles available throughout my four years there, my home base, my eventual comfort zone, has always been theater.

This would explain my invested interest in the manipulation of space and time, and the creation of worlds, both imaginary and real. In a sense, I view my work as an attempt to re-marry the highly segregated arts, in order to realize powerful and communal, ritual, similar to that of pre-industrialized, pre-Christian culture, in an effort to ultimately reintegrate society into a holistic way of being.1 Another layer of my work quite simply attempts to encourage increased awareness in those that partake of, or participate in it.

As an artist, I possess a deeply rooted interest in transforming the mundane, and in actively engaging and transporting an audience into and out of varied feeling states, mindscapes, and worlds both individually and communally experienced.

My inroad to this is dance and movement. In the many years since my formal entrance into the dance world I have strayed from the path a few times, finding myself mostly in the field of arts management. However, even here I eventually found my way back to dance. It was in my freshman year of college that my home base shifted from theater to dance. This recognition of dance as a home base makes sense to me in that movement, the core of dance, is quite literally life. Motion signifies change, progression, and time. The opposite of movement is death. Dance is a celebration of this duality of life and death. In Hindu and Buddhist thought this is seen as a cycle or circle called samsara. The word choreography comes to us from the Greek χορειο (choreo), dance, which is believed to have come from the Greek κύκλος (circle or cycle), and γραφία (graphy), to draw/write. Perhaps this is coincidence, however I find it fascinating that those cultures that value dance, in that it adds an invaluable element to societal functioning, possess a deeper and more profound understanding of this cycle of life and death as well as a heightened awareness of the cause and effect nature of reality.

Ultimately, this understanding has become the bedrock of my artistic practice, and deeply informed the creation of this project.

As I sat in UMD professor Karen Bradley’s office to discuss this work, pondering the various things that I found engaging, at that specific point in my life, I was at a loss in arriving at any concrete ideas with which to work. Karen’s response to this apparent befuddlement was to ask one simple question.

“What are you passionate about?”

In true Karen fashion, she probed a bit more.

“It’s clear from your Facebook posts that justice means a lot to you.”

Indeed, justice is a subject that has the ability to access, within me, a multitude of feeling states, sensations, and associations.

“How do magic and justice intersect?” She knowingly questioned.

With this prompt I sensed a smoldering ember in my belly ignite, fueling a small yet robust flame. With this renewed and focused interest, I hit the ground running, excited at the prospect of what research into magic and justice might uncover. 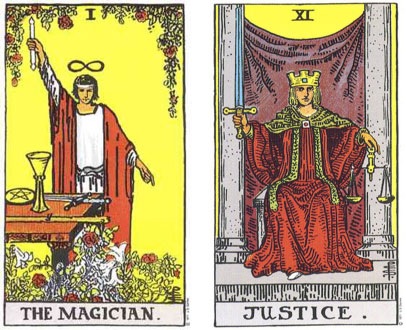 That realm of the unknown, of unlimited possibility, unfettered and unrestrained by conventional thought and pragmatism is a scary place. Like the magician, the artist inhabits this realm of potential, creating and destroying worlds, shaping and reshaping form for both functional and expressive means.

I look back to some of my initial ramblings related to this project and I am swept with the realization that this project’s roots lie deep within fulfilling a long overlooked need, a long held inhibitor to my development as a human being. While travelling in Europe, mid August 2015, after my final module in my Laban Movement Analysis2 certification program, in Belgium, I wrote the following.

“As I sit here in this beautiful city of art, life, and light [Paris], I find myself struggling with demons that have long tortured me. Both my tendency towards shyness and to fall into complacency seem to run rampant at this moment. Though perhaps this is how I transition, as it seems to be heightened each time I travel abroad. There seems to be something visceral about moving between cultures, between different ways of organizing life.

I am compelled to explore further this idea of border crossing or “trans-ness.” Interesting, how Toranika [my Laban Colleague], for her CMA final project, is currently dealing with her own trans issue, transparency, a seeing through. This suggests a boundary through which one attempts to see. Looking deeper to the core of all this, perhaps what is really at play here is my discomfort with borders.

How did I get here? To this place of developing an allergic reaction to certain forms and structures? This is the essence. I am highly sensitive to aesthetic, to form.” (Stedge, Creative Process Notes for Invoking Justice)

This explains the magnetism that I experience, the allure of the Trickster figure, the crosser of borders, the creator of worlds. It is my strongly held belief that the universe provides us with exactly what we are in need of at any given moment along our timeline. Aligning the perfect conditions for the perfect storm of colliding factors. It provides the catalyst. But, it is our responsibility to take hold of the opportunity and see the reaction through to its end.

And so here we stand in 2018, as I inch this project towards its end, ready to present this labor of love in its first public performance, beyond the safety of the university. Though knowing deep down that this ephemeral form we inhabit houses organic, living entities that are never truly finished until they cease to be performed. Hopefully this “Road to Fringe” is the beginning of a long and generous life.

1. Here I refer to the entirety of Western fine arts.↩

2. Rudolf von Laban was a 20th century dance/movement visionary who developed Laban Movement Analysis (LMA), the most comprehensive system in the world, with which to analyze and describe movement. The system continues to grow to this day as the group of practitioners of LMA grows.↩

I'm the Assistant Literary Director at Geva Theatre Center. I've been working in theatre ever since I joined the stage crew after not being cast in my high school's production of WEST SIDE STORY. Since then, I've built sets, hung lights, operated sound boards, dressed actors, stage managed, and become a dramaturg, so it turns out there's plenty to do in the theatre for those of us who aren't performers. View all posts by Becca Poccia Hays