In August, Geva will celebrate the life and legacy of the great blues musician Son House, who lived in Rochester from the mid-1940’s to the mid-1970’s. Journey to the Son is a four-day festival, presenting national and local musicians, blues workshops and demonstrations, critical discussions about Son House’s ongoing legacy, screenings of newly found footage of Son House and the reading of a Geva-commissioned play, written by Keith Glover.

First, a caveat. When I arrived at Geva nearly four years ago, I didn’t know who Son House was. But this project, still a dream at the time, was one of the first things that Mark Cuddy and Skip Greer talked with me about (and I’ve since become quite the evangelist for Son). The idea had come up a year or so earlier, and staff at the theatre wanted to find a way to tell his story. At the time, the idea was to commission a play about Son’s life. But when the Farash Foundation announced its Creative Collision grants, we knew we could do something greater to celebrate the man many refer to as the “Father of the Delta Blues.”

Who Is Son House?

“If the blues were an ocean distilled…into a pond…and ultimately into a drop…this drop on the end of your finger is Son House. It’s the essence, the concentrated elixir.”

There are two ways I can recommend to really get to know Son House. One of them is to read University of Rochester professor Dan Beaumont’s incredible biography, Preaching’ the Blues: The Life and Times of Son House. The other is to listen to Son’s music, which is visceral and emotional. Here’s a very quick snapshot of Son’s life (and I’m leaving out a lot of juicy details, so you’re going to want to read the book…): 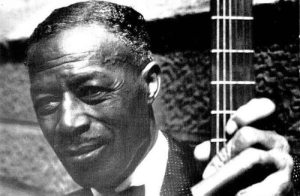 Son House grew up in the Mississippi Delta, near Clarksdale. His father was a preacher, and Son wanted desperately to preach as well. He was “churchified,” as he put it later. And he hated blues musicians at the time – they were playing the devil’s music, he said, and while his family was musical, they sang the music of the church. But he couldn’t uphold the life of a preacher – he was unable to resist the temptations of women and drinking. And, one evening, walking past a “frolic house,” where musicians were playing, he heard the sound of glass on steel – slide guitar. Here’s how he described the experience:

“Well, I stopped, because the people were all crowded around. This boy, Willie Wilson, had a thing on his finger like a small medicine bottle, and he was zinging it, you know. I said ‘Jesus! Wonder what’s that he’s playing?’ I knew that guitars hadn’t usually been sounding like that. So I eases up close enough to look and I see what he has on his finger. ‘Sounds good!’ I said. ‘Jesus! I like that!’ And from there, I got the idea and said, ‘I believe I want to play one of them things.'”

So he bought a guitar for $1.50, and asked Willie Wilson to teach him how to play. Wilson obliged (also helped fix the guitar he had purchased – it wasn’t worth the money he’d paid for it…), and House began to develop his style. He continued working on the plantations in Mississippi during the week, and on Saturday nights, he’d play at the frolics, and eventually, he created quite a name for himself. In fact, Robert Johnson, the young blues singer who, as the story goes, sold his soul to the Devil at the Crossroads, first came to House to learn how to play. In the 1930’s, he recorded several songs for Paramount with Charley Patton as well as on his own, and Alan Lomax recorded him for the Library of Congress. Musicians like Muddy Waters counted Son among their chief influences.

But in 1943, Son House decided to stop playing music, and to leave Mississippi. He’d heard from that there were good jobs to be had in Rochester, and joined the Great Migration north. While here, he worked a number of jobs, including as a Pullman Porter for at least a decade. But he wasn’t playing music – after the death of a close friend in Mississippi, House quit. He explained, “I said, ‘Well, sir, all my boys are gone.’ That was when I stopped playing. After he died, I just decided I wouldn’t fool with playing anymore. I don’t even know what I did with the guitar.”

In 1964, a trio of record collectors from Cambridge decided to look for the musicians who’d made the music they were collecting. Dick Waterman, Nick Perls and Phil Spiro found House sitting on his porch in the Corn Hill District, and helped to re-launch his career. The Newport Folk Festival was thrilled to include Son in the lineup, and Waterman became Son’s manager. At the age of 62, his career had a second phase. From 1964-1974, Son played in concerts around the country, recorded old and new songs, and enjoyed a great deal of fame. Of course, this period was not without its problems (again, read the book…).However, Son’s music began to influence a new generation of musicians, like Bonnie Raitt, John Mooney, John Hammond, and The White Stripes among them.

This is part one of a series about Son House. As Geva prepares for the Journey to the Son Festival this summer, we’ll share more about the process of preparing for the celebration, the research we’ve been doing and the play we’ve commissioned. Stay tuned!

I'm the literary director and resident dramaturg at Geva Theatre Center in Rochester, NY. Geva Journal is the place to talk about what happens onstage at Geva - how what we see onstage came to be, and how we all react to it - artists and audiences alike. Before arriving in Rochester, I spent 10 years at Theatre Communications Group, the national service organization for the American non-profit theatre field, based in New York City. My background is in dramaturgy. As a dramaturg, my main responsibility is to help paint a full picture of the world being created onstage. Dramaturgs do this for artists primarily by sharing information about the context of the world - the historical, biographical and social background. And we do this for audiences by creating opportunities to more fully engage in the world of the play - through lobby displays, articles online and in print, and conversations. And we ask questions. Lots and lots of questions. View all posts by Jenni Werner